Paul is known for his engaging tuition, dedication to his students and the subject of yoga.

Paul started attending yoga classes in 2002 in a small upstairs room in his teachers’ house. Her name was Antonia Boyes Dring. She began learning yoga from B.K.S Iyengar and his two children Geeta and Pranshant in the 1970’s. Every year she would travel to Pune to attend classes there. The method of teaching she learned there and transmitted in her classes was one of the greatest turning points in Pauls life. He attended classes with her every week for the next 10 years. The regularity and discipline of this practice helped to create a positive transformation to his outlook on life. 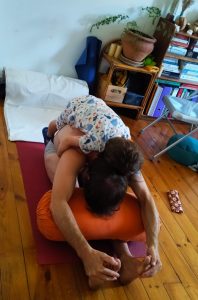 In 2012 Antonia told Paul “You must go to India, to the institute in Pune and learn the roots of yoga there”. She wrote him a letter to present and told him: “It’s not guaranteed they will accept you, but you must try”. He took a flight, a taxi and a rickshaw on the off chance he would be able to study in the institute of B.K.S Iyengar for a month. He was in luck. He was allowed to attend the intermediate classes on the top floor. That month he realized that the practice of yoga would be an integral part of his life from then on. And although a long way off the mark set his sights on becoming a teacher so he could transmit this discipline, which has been such a boon for him. The following year Antonia became terminally ill. To show his commitment to yoga before she passed Paul embarked on a second trip to Pune in December. 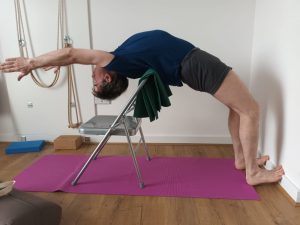 On returning to the UK a close friend of Antonia, Sasha Perryman, offered to train Paul to teach in memory of her dear friend. He started teacher training in 2014. He completed two years with Sasha and completed a further two years with Alaric Newcomb, passing his exam in June 2018. He has been teaching in the Ardéche in the south of France since then. He holds regular classes in ‘Les Vans’ and workshops in his home studio in the Vallée du Chassezac. Paul has visited RIMYI in Pune on three occasions, his last was in February 2019. He visited the Iyengar institute in Rishikesh in March 2020 and 2018 to study under Usha Devi. He regularly attends classes and workshops with senior Iyengar yoga teachers, Alaric Newcomb, Cathy Boyer  and Uday Bhosale.